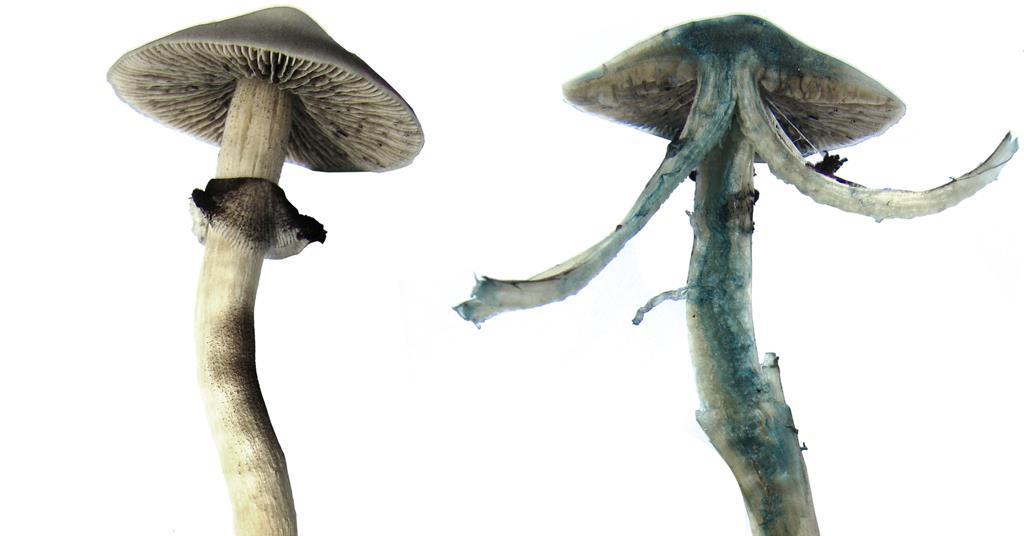 Scientists (Claudius Lenz, Jonas Wick et al) investigated the source of the observable Psilocybe spp. blue 'bruising' phenomena.  They propose two regulatory enzymes that control the transition between psilocybin and psilocin; further they show one of those enzymes is responsible for production of fused psilocin polymers that produce a visible blue color.  Through this work the data also suggests that the phosphate group of psilocybin plays a protective and stabilizing role.

The hypothesis of this paper is not as obviously written as most; the Scientists propose that the blueing reaction observed is due to polymers of psilocin and they seek to answer whether or not the compound was a chain of at least two (dimer), indole compounds (specifically a 2‐derived ortho‐coupled bi-aryl-idenedione); theorized to be extremely structurally similar to indigo dye (Ex 1 & 2).

While the dimer structure was observed to be similar to indigo dye, it must also be noted that psilocin will actually form longer chains, some of which loose the ability to trap light based on the charge of the oxygen molecules where positive/with hydrogen=no color and negative/without hydrogen=blue (Sch 2).

Pigments are compounds that provide natural colors for fauna, flora, and fungi.  The vast majority are complex chains and/or rings of almost exclusively carbon and hydrogen atoms, with occasional insertions of oxygen, phosphate, bromine, or other unique atoms (Ex 3).  As photons of light interact with pigments, specific wavelengths can become absorbed by, bounced around in, or reflected away from the pigment.  The photons that end up making it to your eyes (and become the colors you see) are the result of how the structures of the pigment absorb, transmit, excite, or reflect those photons.

Indoles are a class of compounds that share a snowman-like shaped structure (Ex 4) and are the functional group of the amino acid tryptophan and a wide variety of metabolites (Seratonin, Auxins, Psilocybin, etc).  These ubiquitous compounds interact with human biochemistry, are important regulatory plant hormones, and even play a role in bacterial growth/immunity.

The necessary role that enzymes play in biological systems cannot be understated.  They are proteins that work as biological catalysts.  They speed up chemical reactions by either building (anabolic enzymes) or breaking down compounds (catabolic enzymes) all while being built from genetic code written in chromosomes.  The vast majority of enzymes end in '-ase' and include the reaction it catalyzes.  Exceptions being some of the originally discovered enzymes, like pepsin, renin, and trypsin [2].

Almost all enzymes work under a specialized lock-and-key methodology, where one enzyme type works on a specific class of compounds (or substrates).  For example, consider the sugar lactose in milk, it needs to be broken down into simpler sugars for your body to use it.  To do this catabolic reaction, your body makes an enzyme called lactase, to break it down the lactose substrate.

In this paper the scientists isolated and proved the existence of two unique enzymes 1) that removed the phosphate group from psilocybin to produce psilocin they called phosphatase PsiP and 2) polymerizes psilocin together to form polymer chains called laccase PsiL.  To prove this, they isolated enzyme extracts of P. cubensis and separated them by their size.  Upon isolating a fraction of those extracts that reacted with standards of psilocybin and psilocin, those fractions were analyzed using high performance liquid chromatography.  The comparison between an enzyme faction and the same fraction exposed to heat to destroy the enzyme (Fig 2); the results of which show that there is indeed a dephosphorylation occurring in the enzyme extract fraction, and that reaction does not occur when the enzyme is denatured (or dismantled) by heat.

Furthermore, the Scientists propose that the presence of the phosphate group on psilocybin actively prevents psilocin polymerization due to inability of PsiL to act on psilocybin as a substrate.  Or as they put it, "Our results  further suggest that kinase‐mediated phosphorylation during (psilocybin) 1 biosynthesis reversibly deactivates a reactive natural product, and  stabilizes it with an easily removable protection group that allows instant on‐demand formation of an oligomeric natural product."

Reviewing the data and the conclusions put forth, the hypothesis proposed by the Scientists was supported. The reason for acceptance are quoted below (emphasis and parentheticals mine):

"[Matrix Assisted Laser Desorption/Ionization with Mass Spectrometry] and [Carbon-13 Nuclear Magnetic Resonance] spectroscopy show that the blue color is due to a heterogeneous mixture of quinoid psilocyl oligomers, primarily coupled [at the Carbon-5 position]."

3) Rossouw, Faan.  Why are Pilocin and Psilocybin Orally Active?   Medium.com. 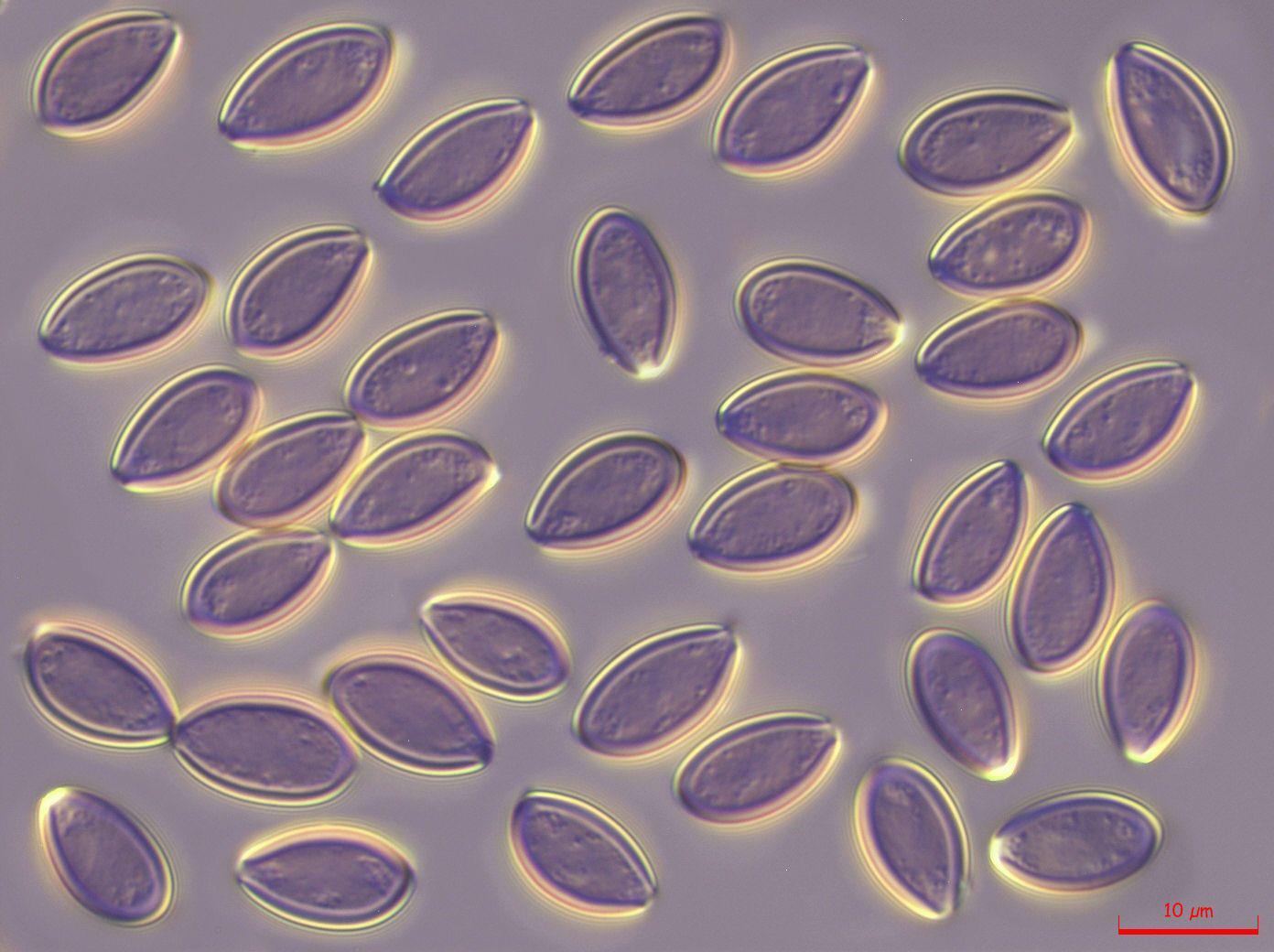 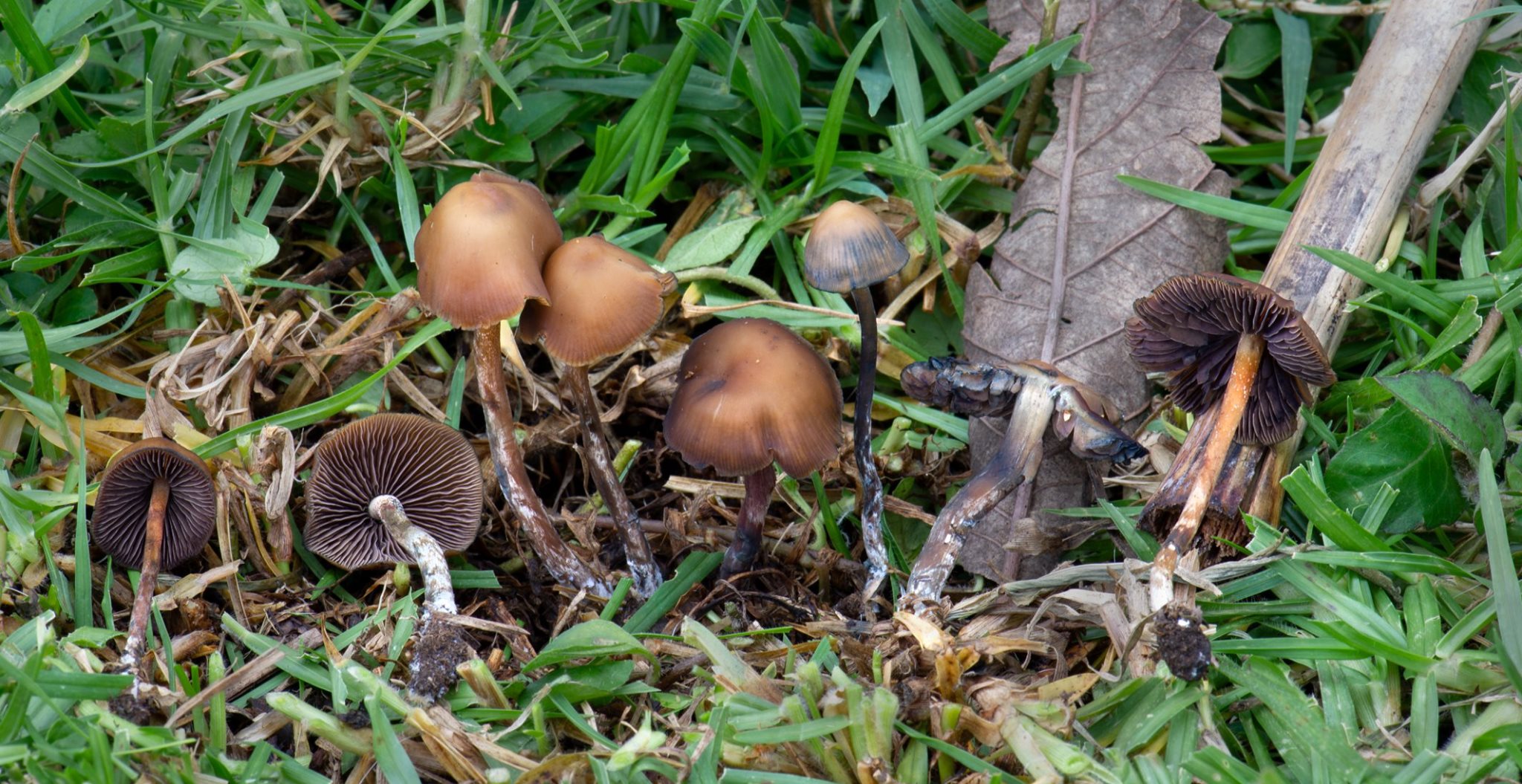